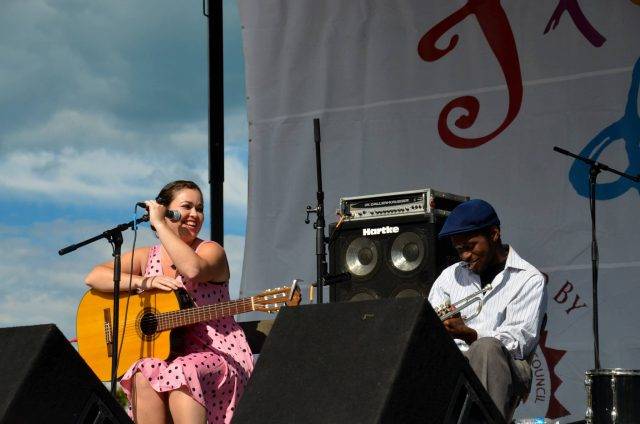 Vivian García is a singer-songwriter from Chicago. She’s been singing ever since she can remember, but didn’t pick up the guitar for the first time until late in the game. However, being a DIY musician as she puts it, means wearing the hats of many jobs in the music industry which can become draining on occasion.

As well as being a musician, she has to juggle her passion with her day job and studies. We wanted to find out more about her musical endeavours and how musicians such as herself really need to commit and grind it out, hoping to build on their careers and make their big break.

As any musician, Vivian is trying to make a living out of music. Without a manager she has pretty much had to fend for herself. She self-produced her own album last year and had the chance to collaborate with different artists on her tracks. She feels it is very important to respect the artistry and lives of all the musicians she works with, and strives to get them decent paying work with her. As her own manager, booking her shows can be a lot of work. Coordinating schedules enough to set rehearsals or play shows with other musicians who have equally as hectic agendas is certainly not easy.

Each venue has its special requirements. These days many places will not hire you for work unless you can also bring in your own crowd. It’s complicated for a musician to not just focus on making and presenting good music but also having to do the P.R. for it as well. Some places don’t even have a sound system so she has to lug all her own gear across the city, fill the place up and put on a good show.

She is always grateful toward every artist who collaborates with her, knowing that they are also vested in their own projects and are working hard to promote themselves. It is very important to her to work with people who she enjoys as friends too because you will be spending so much time with them and making lots of decisions together and if there is no mutual respect and camaraderie it can be a nightmare to perform together and have the right chemistry on and off stage.

As for making a name for herself in the press, while it is an extremely important part of this industry, it can be a huge challenge to fit in time to write up interviews while also trying to get back to venue owners, write new music, practice old music, create bios and P.R. specific to each show.  Luckily, Vivian could squeeze in her first ever radio interview the other day on vocalo.org!

In line with the press, Vivian has an interesting trajectory regarding photography that falls extremely off the radar of mainstream and so has yet to do many things in an ” official” way. However, she has been quite lucky to have colleagues at many of the festivals she plays at who are excellent photographers and capture great pictures.

Vivian has only made one video to date and that was for the song Cold Bed. She was luckily approached by the video makers about producing something for her, for free, because they enjoyed her music.

As you can see, getting around in the music industry isn’t easy and making the contacts you need can be challenging. That’s why Melboss will soon be helping musicians get by and find the contacts they need to build their careers. Watch this space to find out when our beta version will be launched!